A disappearing part of western Americana 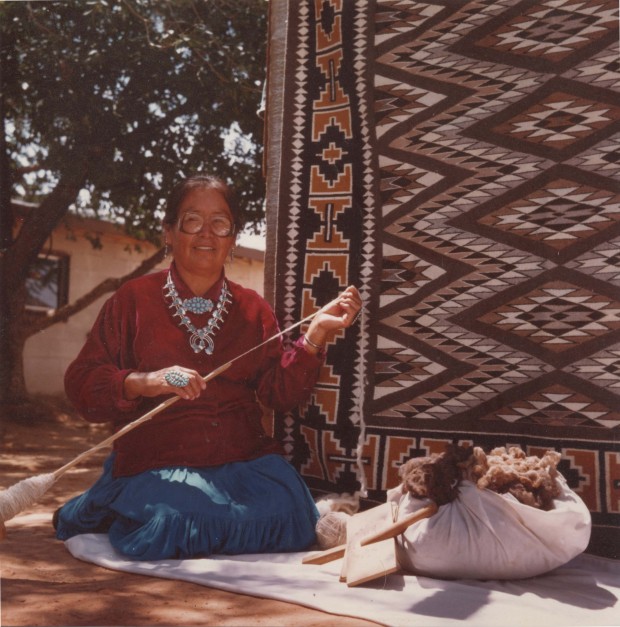 Light Plays across distant mesas, the spires of Monument Valley rise one hundred miles to the west, and only an occasional pinon or juniper tree breaks 180 degrees of sky. Alice Roy lives and weaves in this remote area of Teec Nos Pos on the Navajo reservation, near the area known as the Four Corners.

The views are spectacular. The land undulates away from Alice’s simple home and breaks occasionally into an unexpected sandstone canyon where pools of water collect during the sparse summer rains. It is here that Alice and her husband raise a flock of thirty to forty sheep, plant a small garden in a canyon, and where Alice weaves her beautiful Teec Nos Pos rugs today.

Shearing the sheep in the spring, Alice then washes the wool with yucca root which produces a sudsy soap, leaving the wool soft and clean when dried in the high desert sun. She then separates the wool, the light from the dark, before carding it and spinning it into a soft and even yarn. The darker wool, which comes from the brown and black sheep, is then put into a large bucket of water and placed over an open fire. Pinon pitch, which is gathered from the pinon trees near Alice’s house, is then added and when the yarn is fished out with a stick a couple of hours later, the yarn has become a deep rich black. Various shades of gray are made by carding white wool together with black wool. Colors are made by boiling the yarn either with native plants or package dyes from the store. Packaged dyes were in the Southwest and became part of Navajo weaving as early as 1870. Alice uses packaged dyes sparingly, preferring the natural greys, blacks and whites with only a touch of brighter color for accent.

Alice and her husband have brought up six children, five girls and one boy in this simple lifestyle. None of the girls have become weavers; all except one live off the reservation, and have jobs in unrelated fields. In all probability, when Alice passes away, Navajo weaving will come to an end in this family. It is a pattern which I see repeated far too often on the Navajo reservation today. Alice’s mother was a weaver well into her eighties. At this point in her life Alice is making about one rug a year. I feel fortunate to have been a witness to this passing part of history, to have known Alice and her family, and to have been able to handle Alice’s weavings for the past eighteen years.